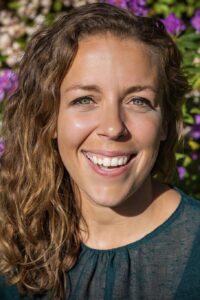 Katrina Turman (she/her) is a native of California and an alumnus of the Piedmont East Bay Children’s Choir, where she began singing at age five. Prior to coming to Columbia Choirs, Katrina was an assistant conductor for the San Francisco Girls Chorus where she conducted numerous concerts at Davies Symphony Hall. Katrina has also taught at the Piedmont East Bay Children’s Choir in Oakland, CA and the Bellevue Youth Choir in Bellevue, WA. In addition to conducting, Katrina was a professional singer of the Munich Bach Choir in Europe.

Katrina is a fervent advocate of the relevance of children’s choral music and was published in the American Choral Directors Association’s Choral Journal (2021) with an article titled, “Children’s Choral Repertoire with Highlighted Pedagogical Elements.” Katrina holds a Bachelor of Arts degree in Music from the University of Oregon, a Post-Graduate certificate from the Kodály Institute, and a Master of Music degree in Choral Conducting from the University of Washington.